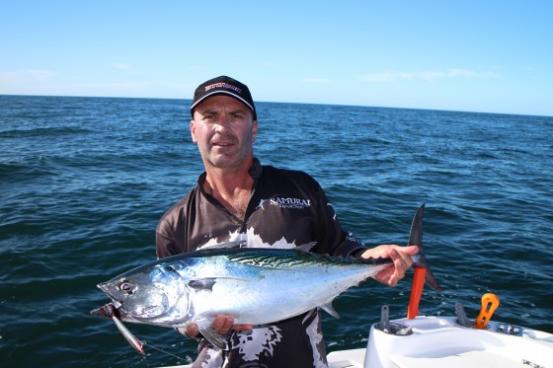 Chasing pelagic species with lures is one the most exciting and visual ways to fish. At times however it can be very testing, pushing the angler to the limits of their knowledge to unlock the secret formula to get that unforgettable hook up. A recent fishing expedition to Exmouth on the Coral Coast region of North Western Australia found us testing our skills on fast moving schools of Northern Long tail and Mackerel Tuna.

Half way to the Murion Islands, the current and winds were opposing making for awkward casts to the fast moving and small schools of tuna. As the bait schools were not tightly packed , the feeding tuna would only be seen busting up for a few seconds at best before sounding to pop up 30 meters or so somewhere else. In these instances it is best to take turns between angler and skipper to best position the boat to make every shot count. The perfect lure for the task of punching into the wind and getting it right into the feeding pack was the Bungy Cast sinking stick bait. Weighing in at 30g and a length of 100mm they were easily deployed via the New Samurai Kestrel KE 502-70 . While the best choice is to make a long cast using the wind to your advantage, this is not always going to be the case when the feeding pack is forever changing directions. In these instances a speedy and accurate cast is essential even if straight into the wind.

The Bungy Cast stick bait fires out tail first punching a hole in the wind to land right where the feeding tuna are busting up. An old fly fishing saying is “Match the Hatch”, and this worked perfectly as the Bungy Casts my partner and I used that day were very close to size, colour and action of the bait being smashed .

When using lipless minnows and stick baits, I favour a sharp downward twitch technique similar to that used by Barra fishermen, but vary the retrieve to suit the conditions and speed of the fish being targeted. While the standard treble hooks proved to be deadly on hook ups, I sometimes change the trebles for Gamakatsu Single Lure Hooks. If a lot of fish are being hooked this is a must for a quicker release and safer for all handling the fish. Another advantage with single hooks is that there is less chance of the lure’s inbuilt action being impeded by the bulk of the treble hooks.

The Bungy Cast is a lure for many situations where delivering it great distances is easy providing the balance of casting weight and rod casting capability is matched.