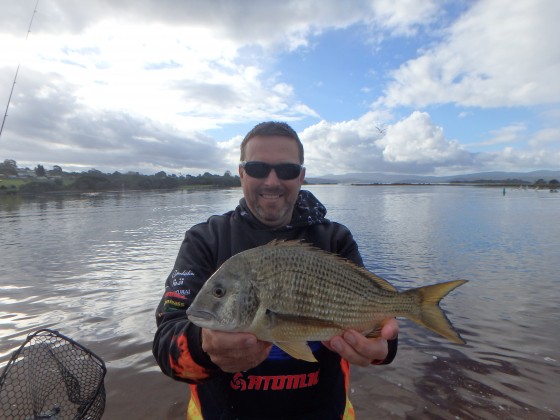 Recently I was able to compete in the Southern Bream Series at the Mallacoota in East Gippsland Victoria. This was the first time I was been to this iconic water way. Mallacoota is home to some of the biggest black bream in the country and is renowned for producing trophy bream and flathead.

I was given some advice from a respected angler on several places which might hold good fish. Slow rolling Crank 38’s over the weed edges was the first part of my plan. After about twenty minutes of fishing time with no results I tried a Kangoku 40mm Vibe in M-09. The colour has bright gold sides with a black top and orange belly. Due to the recent rain, the water was muddy and visibility was low. I figured that the flash from the gold and the deep rattle combined with this vibration style lure might just do the trick. My first cast with this lure produced my first keeper for the day. By 8:12 there was three fish in the live well and I was able to start upgrading my fish. Saturday was on of the best days I have ever had while fishing competition. I landed 28 legal bream on the one Kangoku Vibe and 15 of these were over 30cm to the fork of the tail. I only lost two fish for the day. Most of the bites occurred just after the lure hit the bottom and with the rear hooks firmly in the corner of the mouth.

The author with a nice fat bream

Lures at the ready

The lad getting ready for a days fishing

Kevin Varty took day one honours with an impressive 3.6kg bag for three fish. When speaking with Kevin on Sunday after the weigh-in he told me that that his smallest fish was 31cm to the fork. This meant that he had caught two fish around 1.4 kg. The biggest of the two weighing 1.455 kg and was to be the big bream for the competition. This fish also equalled the big bream in the boating division also weighing 1.455 kg.

My bag weight of 2.83 kg left me in second place overnight closely followed by Scott Marcinkowski on 2.825kg.
On day two I headed back to the same location as day one. The bite was slower and I found that longer pauses were required to entice the bream to bite. Using vibes I was able to catch ten legal bream for day two for a smaller bag of 2.455 kg.

Kevin Varty took first place with an impressive 6/6 fish 6.425 kg bag. With a combined weight of 5.285 I was able to finish in second place. Scott Marcinkowski back up his day one effort take third place.

For a first time visitor to Mallacoota my experience was nothing short of exceptional. My only regret is that I didn’t arrange to have week off to explore the system more thoroughly.